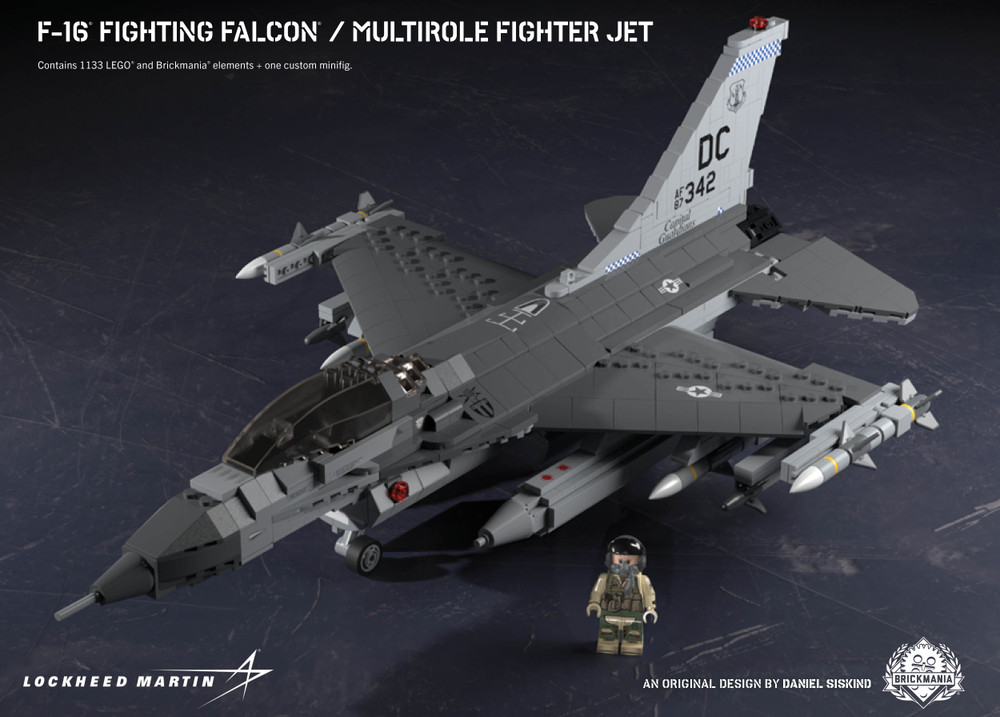 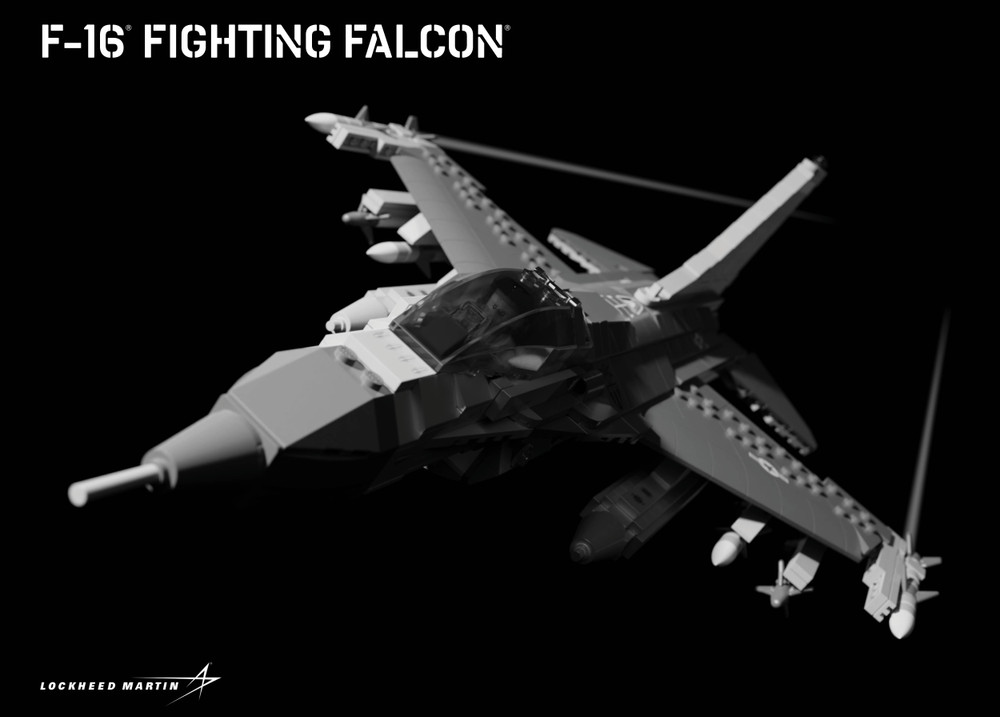 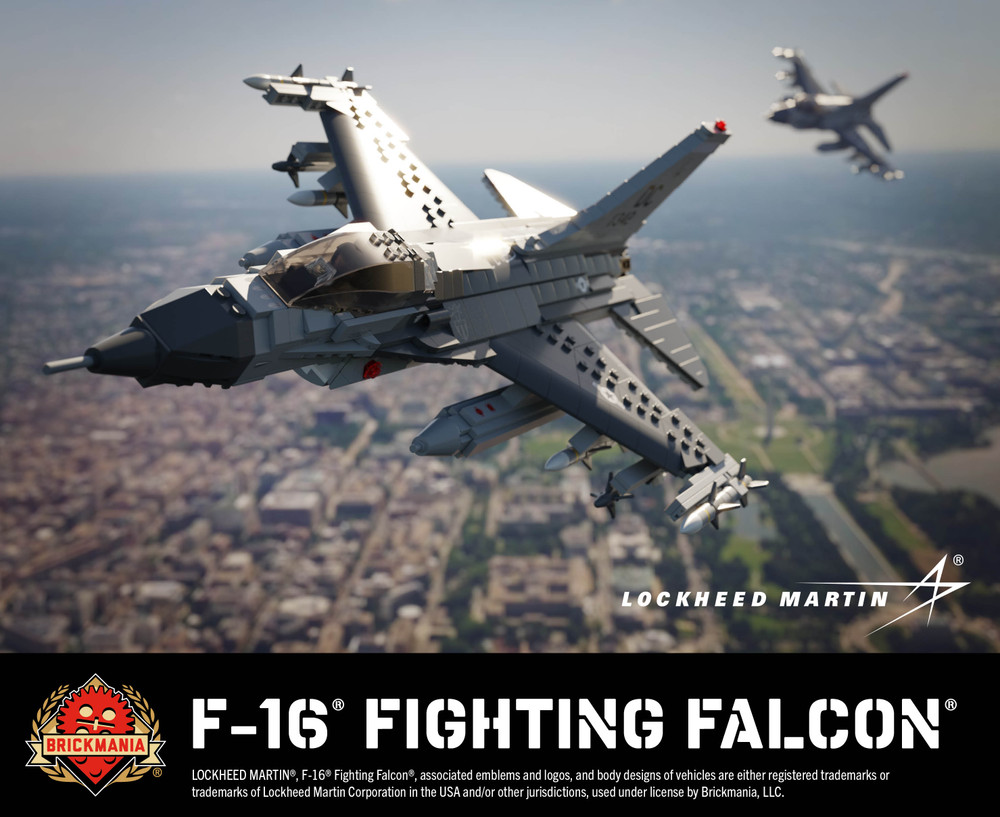 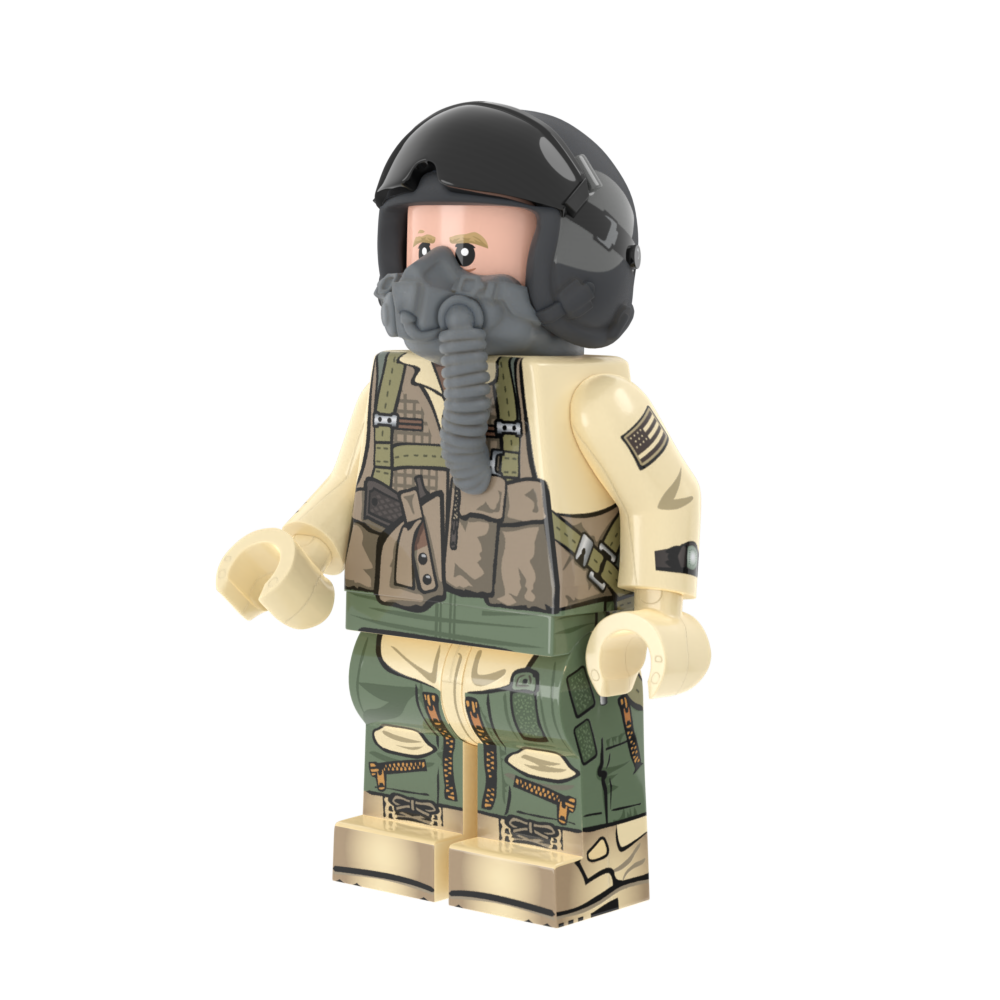 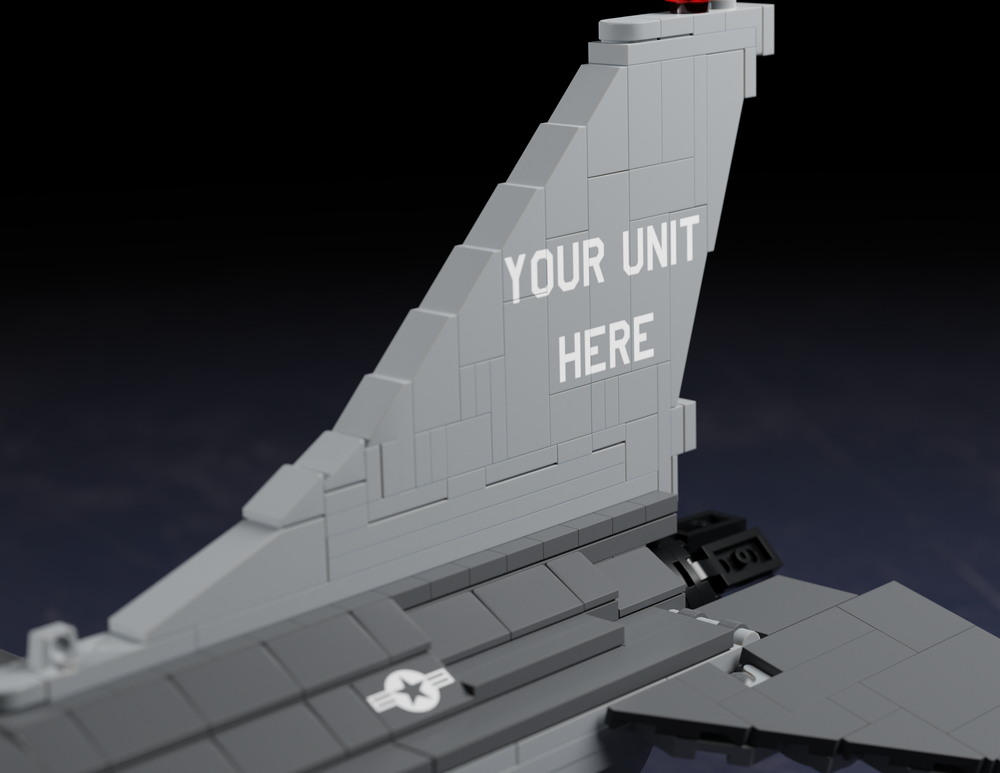 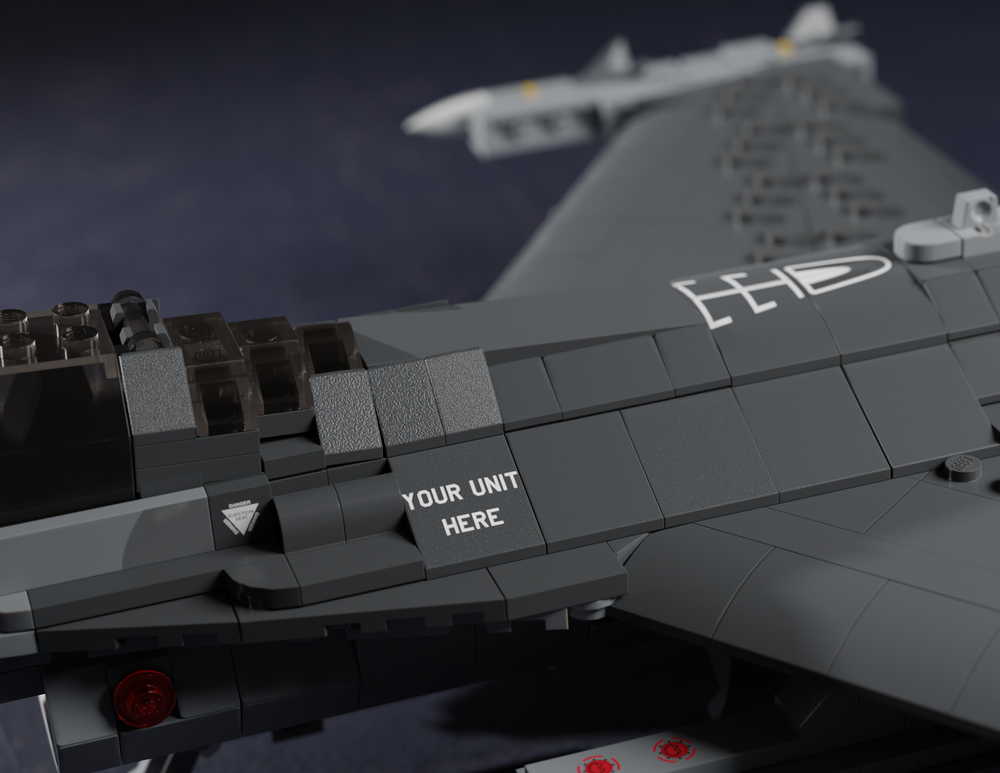 Here's how it works…

For a closer look at F-16 operators, click HERE.

The only surfaces that will be customized are showcased in the image below. There is not an option for additional customization beyond the specified areas. Brickmania reserves the right to decline customization if the request is unclear, cannot be executed reasonably, or is deemed inappropriate. Brickmania will contact you if your request cannot be fulfilled. 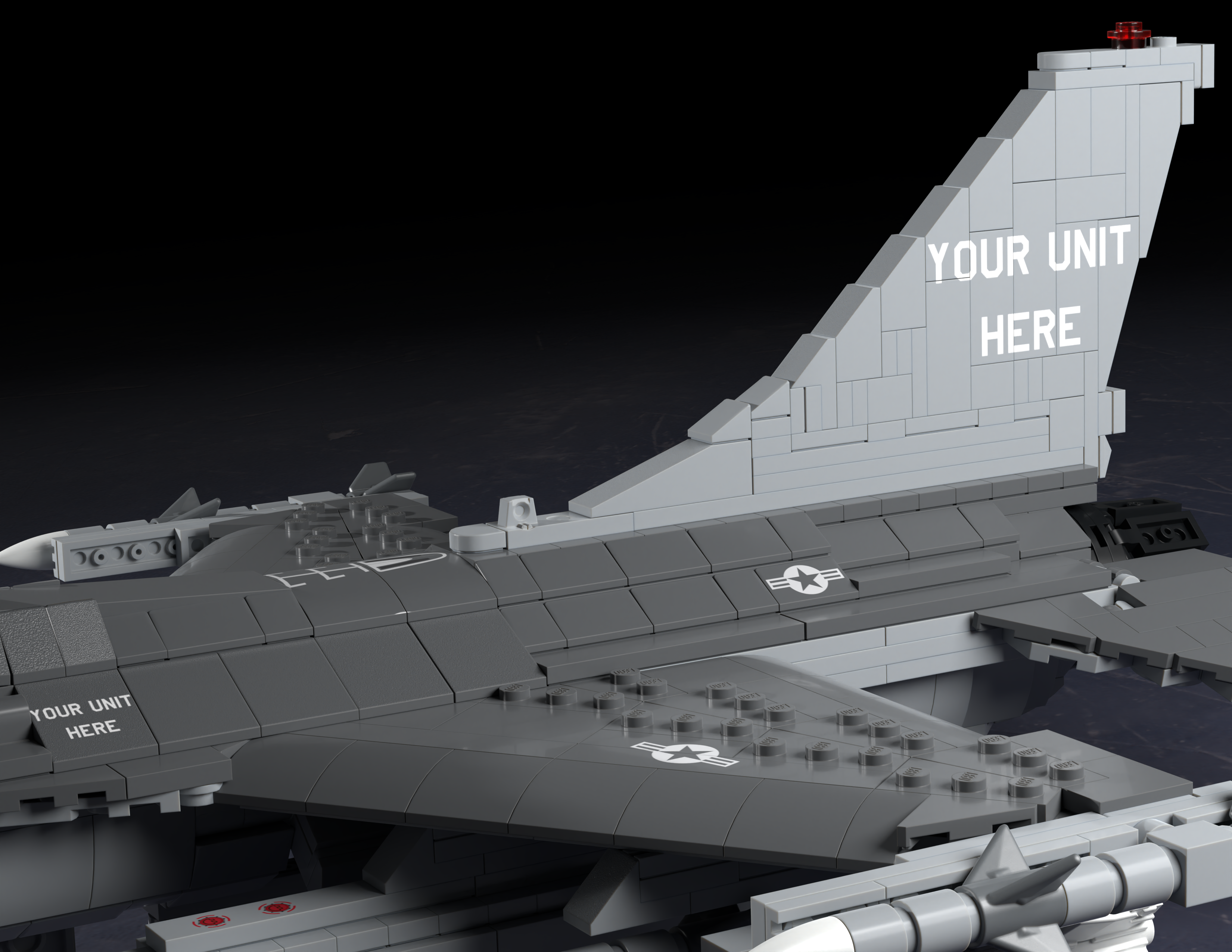 The jet age of aerial combat has pushed the envelope of what is possible. However, the push of the intrepid comes at a downside—cost. Advancement isn’t affordable, nor is it efficient. Advancement is precisely the antithesis of those verbs. This is a main reason that in the 1970s the United States Air Force (USAF) looked to add a dependable, efficient, and low-cost alternative to buffer their air wing. Additionally, the F-4 Phantom and F-111 Aardvark—the main USAF aircraft—were large and expensive to build and maintain. While advanced, they could be out maneuvered by the smaller and nimbler Soviet Migs. The United States needed a lightweight option to counter the ensuing threats. General Dynamics and Northrop were approached and each developed and entered models for selection. Ultimately, General Dynamics was selected, and as is said, the rest was history.

General Dynamics delivered prototypes of the Fighting Falcon by the mid 1970s with the F-16A making its first flight in December of 1976. Full models were delivered to the USAF in January of 1979. The production and contract of the Falcon was also a bit unique. The United States entered into a consortium agreement with several NATO countries—Belgium, Denmark, the Netherlands, and Norway—to aid in the initial production as well as promote good faith between allied nations at the height of the Cold War. The Fighting Falcon has a remarkable track record and is in use with air forces around the world. The fighter jet has fought in almost every theater of operation but has specifically witnessed action as part of coalition efforts in the Gulf War and in the War on Terror—predominantly Iraq and Afghanistan.

To power the F-16C, either a single Pratt and Whitney F100-PW-200/220/229 or General Electric F110-GE-100/129 engine are used. These capable and reliable after-burning turbofan engines push the Falcon to speeds more than Mach 2. This, coupled with a strong airframe, allows the plane to push 9 Gs (9 times the weight of gravity) on tight turns. As a multi-role fighter, the Fighting Falcon handles diverse loud outs that are mission adaptable. For combat-air-patrol (CAP) missions, a common array includes four AIM-120s and two AIM-9s. This gives the aircraft an advantage in air-to-air engagements. In case missiles are not an option, a M-61A1 20 multi-barreled cannon with 500 rounds for close in contact or ground strafing runs. Other options include air-to-ground missiles and smart bombs, as well as fuel tanks to increase the fighter’s already impressive 2000-mile range. Today, there are roughly 1,000 F-16C/D models in use by the United States Air Force, with many more being using around the world. The F-16 has admirably lived up to its moniker of the Fighting Falcon—nimble and fierce. 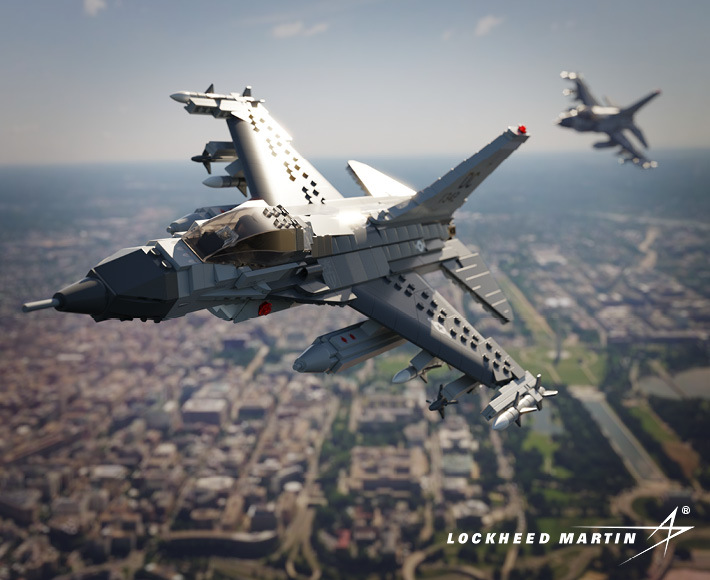 Beyond the customization options, this updated build features custom-created ordinance elements, a sturdy design, functional landing gear, and an updated minifig. All details are custom printed.

No display stand is included, be sure to pick up the new Universal Aircraft Stand – 2023 Edition to complete your build!

LOCKHEED MARTIN®, F-16® Fighting Falcon®, associated emblems and logos, and body designs of vehicles are either registered trademarks or trademarks of Lockheed Martin Corporation in the USA and/or other jurisdictions, used under license by Brickmania, LLC.