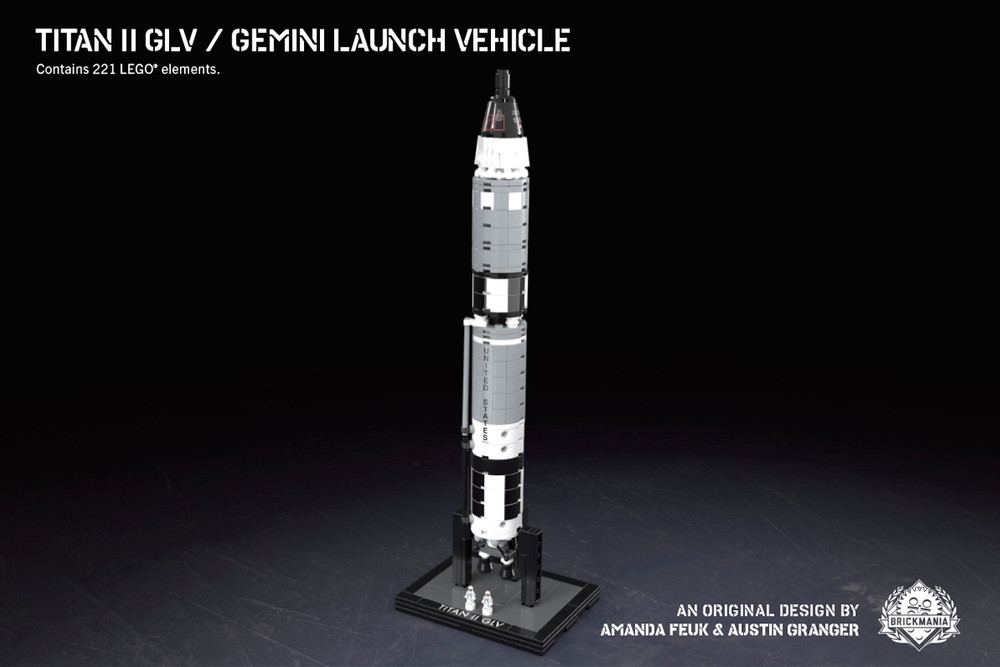 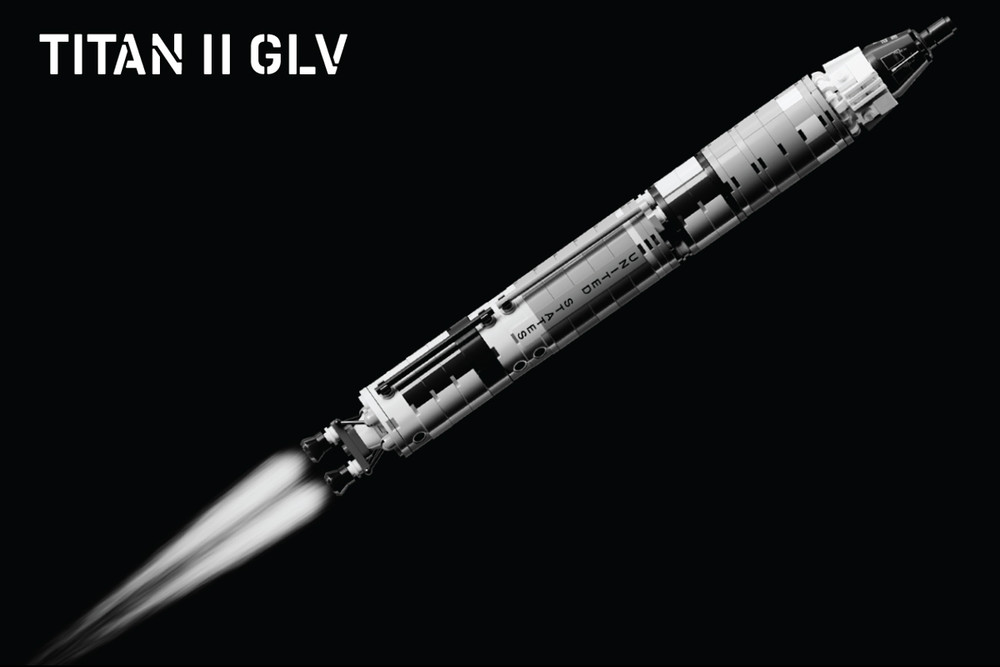 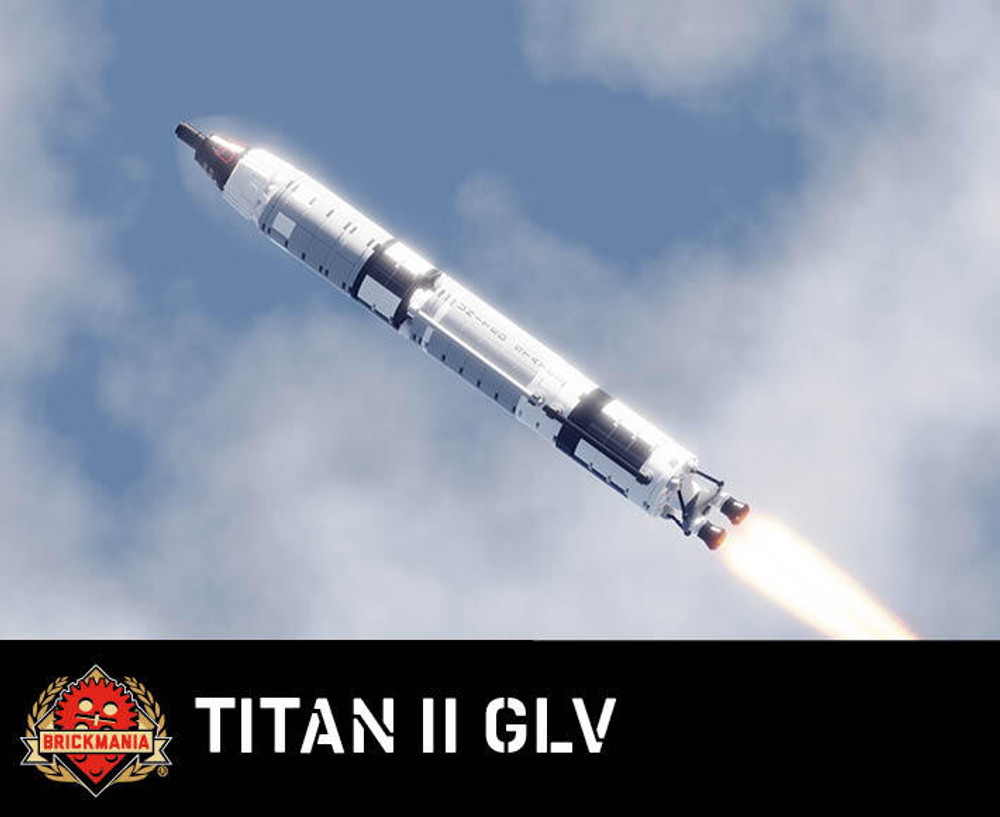 The Titan II GLV (Gemini Launch Vehicle) was the workhorse behind NASA's Gemini Program. Between 1964 and 1966, the Titan II GLV and Gemini spacecraft flew 12 successful missions which helped NASA bridge the gap between the early Mercury missions and the Apollo moon missions. The Gemini program helped test and solve many of the unknowns that would be critical to the Apollo program, including long duration spaceflight, rendezvous and docking, extra-vehicular activities (EVAs), and new state-of-the-art fuel cell technologies.

Like many launch vehicles from the early days of the US Space Program, the Titan II started life as a nuclear ICBM. Unlike its earlier cousins, which used super-chilled cryogenic propellants, the Titan II used a cocktail of hypergolic propellants that would combust on contact with one another. Since hypergolic propellants can be stored at room temperature, this allowed the Titan II missiles to be stored fully fueled in their silos at all times, ready to launch at a moment’s notice. In order to meet the Gemini program’s performance requirements and pass NASA’s stringent human-rating criteria, a number of modifications had to be made to the existing Titan II missile. Redundant systems were added, structural enhancements were made, and the propellant was chilled to increase its density and allow more fuel to be loaded. The result of these modifications was an incredibly reliable launch vehicle, with a 100% safety record across its 12 launches.

The Titan II was powered by a single Aerojet LR87 engine. The LR87 was responsible for the now iconic "BWOOOOP" sound made by the Titan II at launch. This was caused by the ignition of a small hypergolic starter cartridge that creates a burst of hot gas to spool up the turbo pumps that fed fuel into the combustion chamber. Despite having two engine bells and combustion chambers, the LR87 is considered to be a single engine, as both combustion chambers share a single turbo pump system. The two engine bells can gimbal independently of one another, providing the Titan II with full pitch, roll, and yaw control without the need for aerodynamic control surfaces. The LR87 was a powerful engine, designed to launch the Titan II Missile as quickly as possible, so its massive 469,000 pounds of thrust had to be significantly throttled back for the safety and comfort of the astronauts aboard the Gemini spacecraft. Despite the reduced thrust, the Titan II GLV still subjected its astronauts to an intense 6 G’s at launch, far more than the 4 G’s later felt by astronauts aboard the Saturn V, or 3 G’s of the Space Shuttle.

In an effort to simplify the design of the Titan II, engineers added a feature which is seldom seen on US rockets; a ring of small round holes around the interstage section between the first and second stages of the rocket. These holes serve as vents that allow the second stage engine to fire before the first stage engine shuts down. This is known as "Hot Staging", and while this was a common practice in Soviet rockets, the Titan missiles are one of the only US rockets to have used this method. This is done to keep the fuel pressed against the bottom of the upper stage fuel tanks during stage separation, so air doesn't get into the fuel lines when igniting the second-stage engine.

Rockets derived from the Titan II continued to fly regular missions up until 2005, with the Titan III and Titan IV increasing the payload capacity by strapping large solid rocket boosters onto the sides of a modified Titan II core. Though the avionics and control systems were modernized over the decades, the main booster of the Titan rocket family remained more or less visually identical throughout its 5 decades of service. 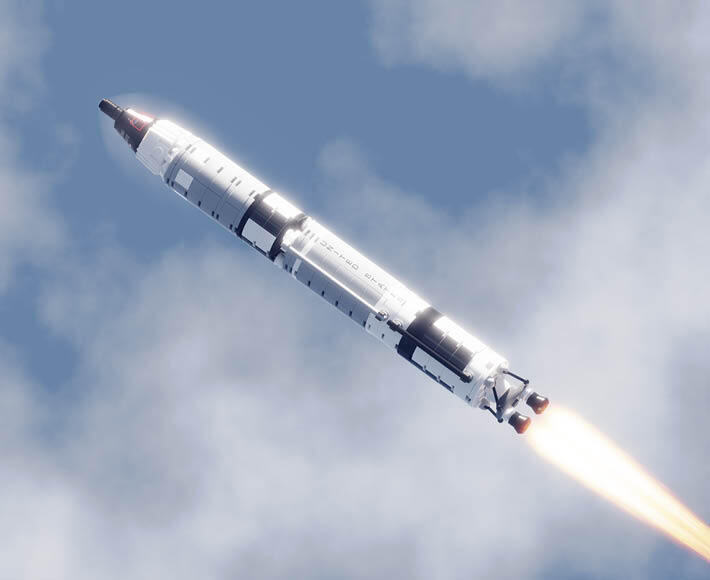 This beautiful display kit features detailed custom printing, high-quality stickers, and two custom astronaut minifig statuettes that are sure to be the talk of the custom LEGO community upon their release. Also included is a display stand with custom printed name plate, and detachable astronaut module.