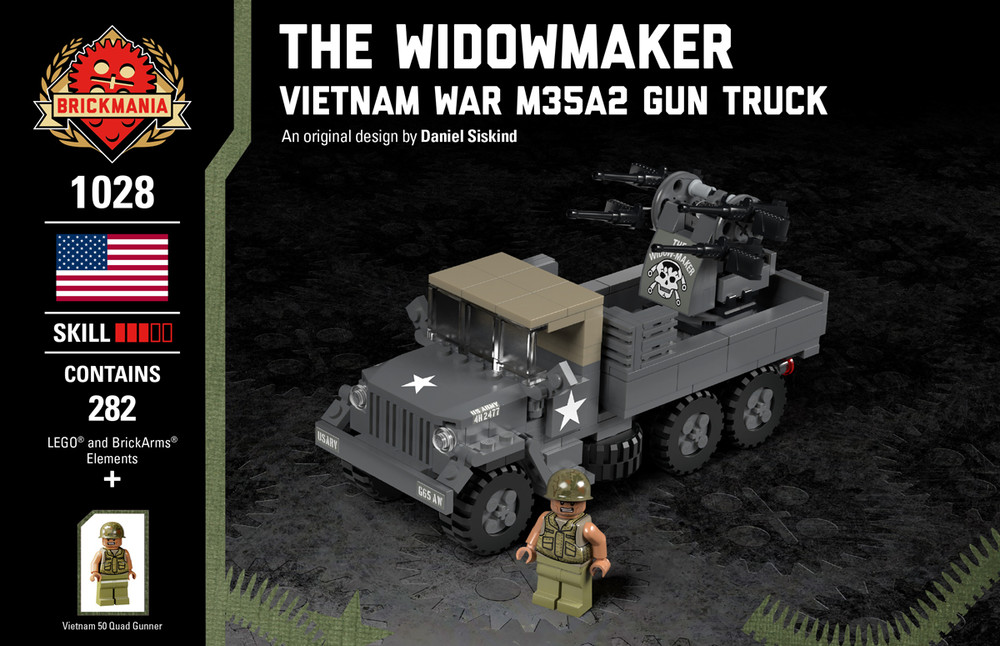 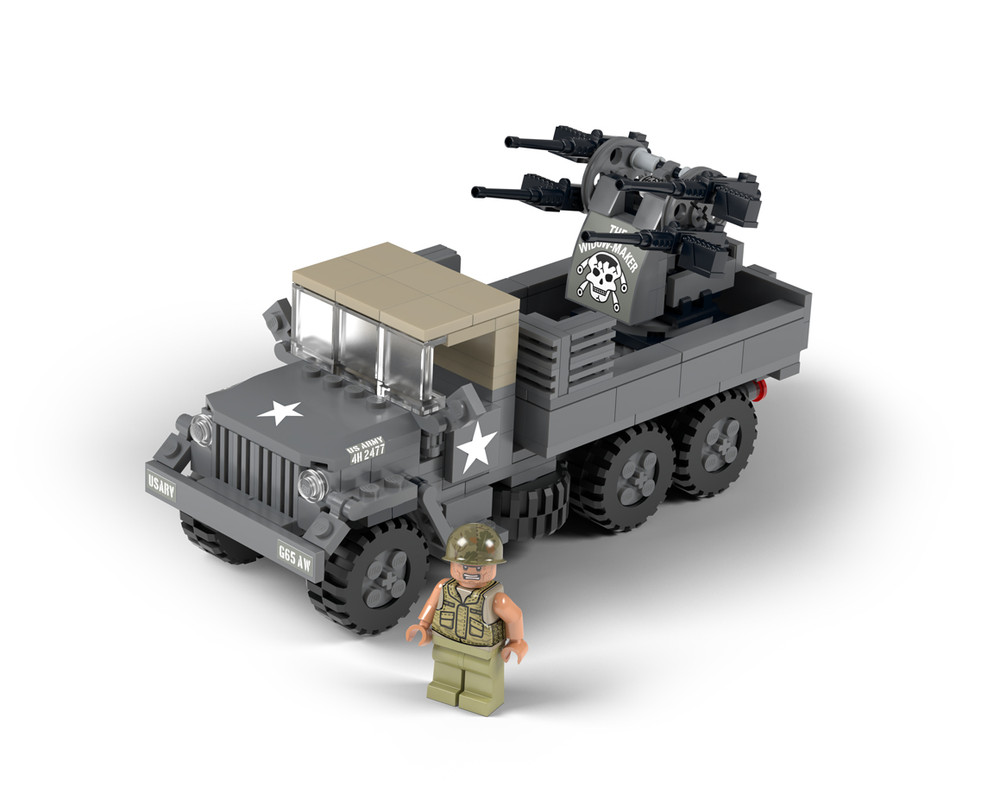 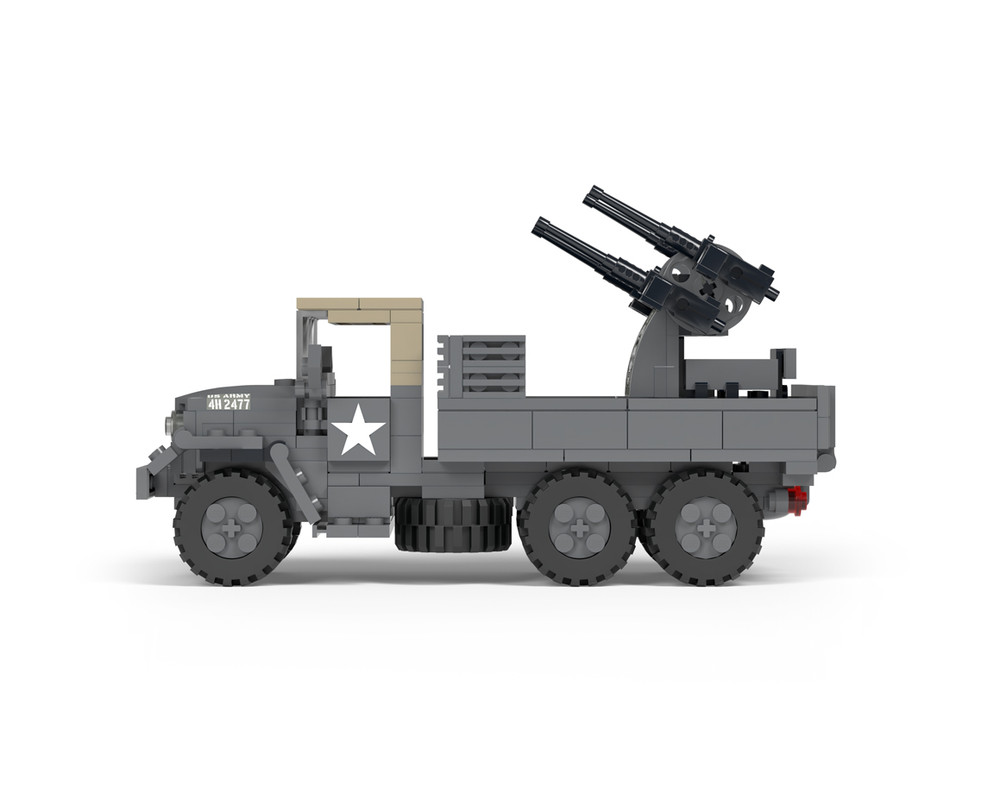 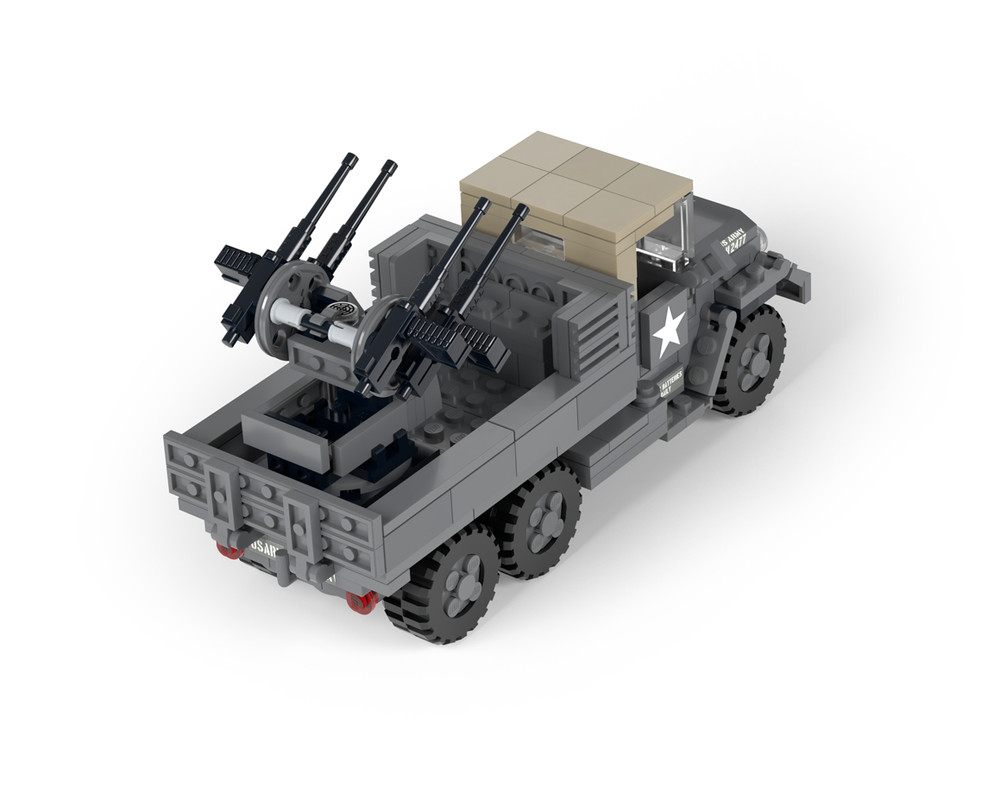 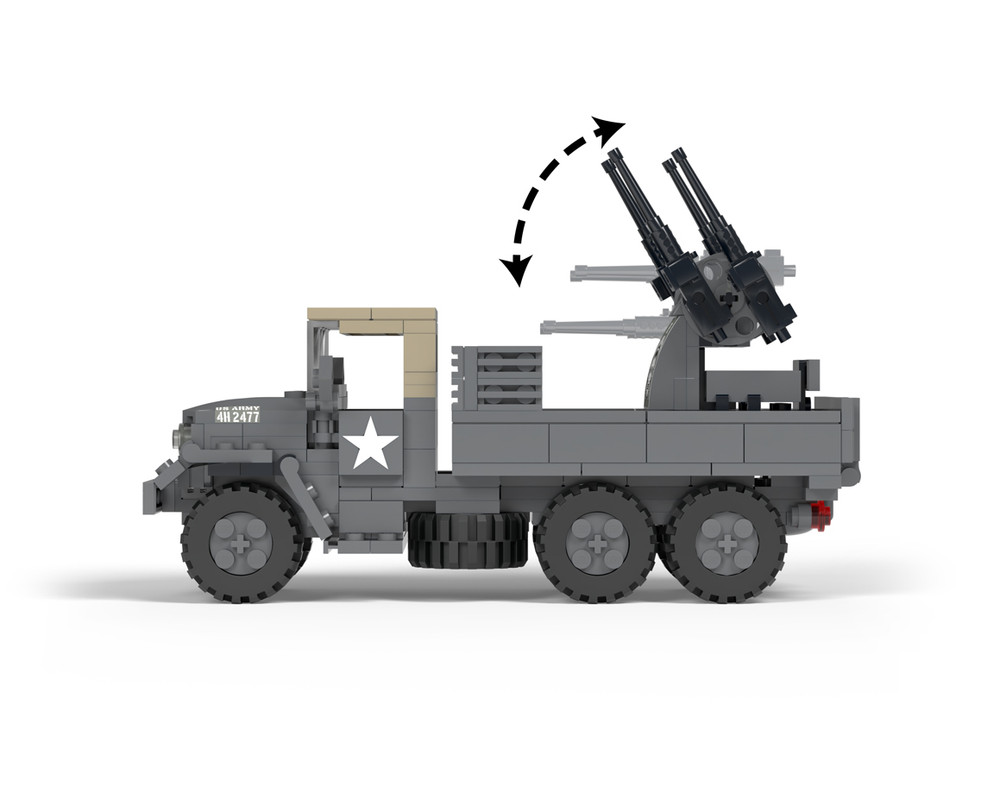 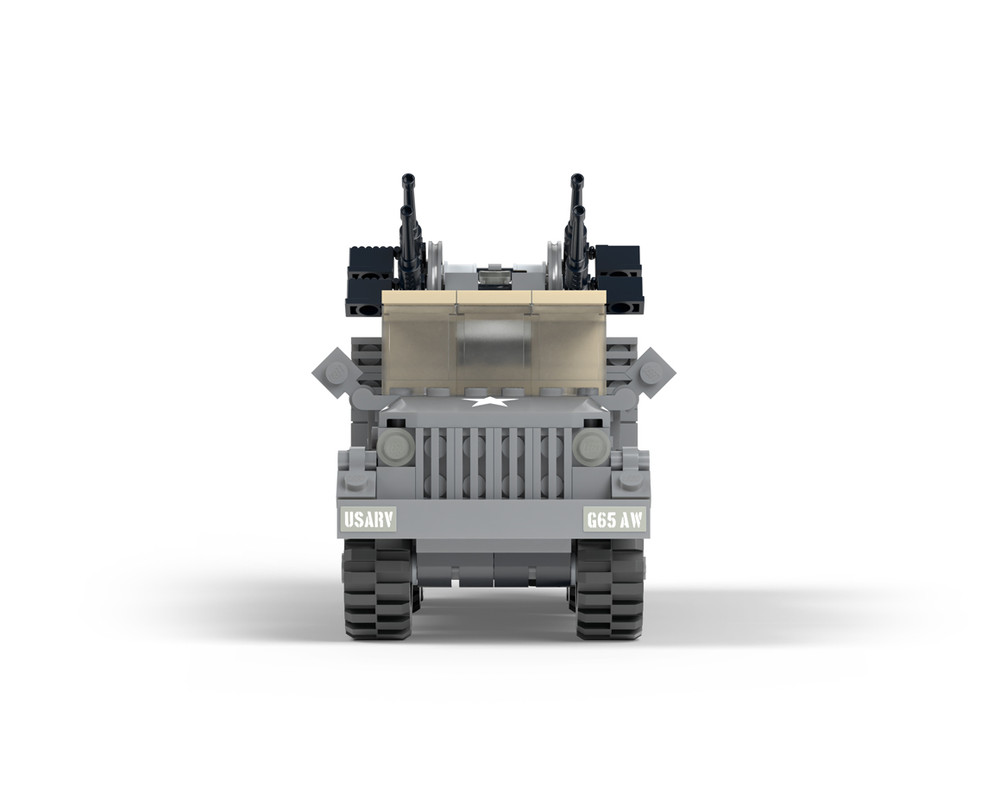 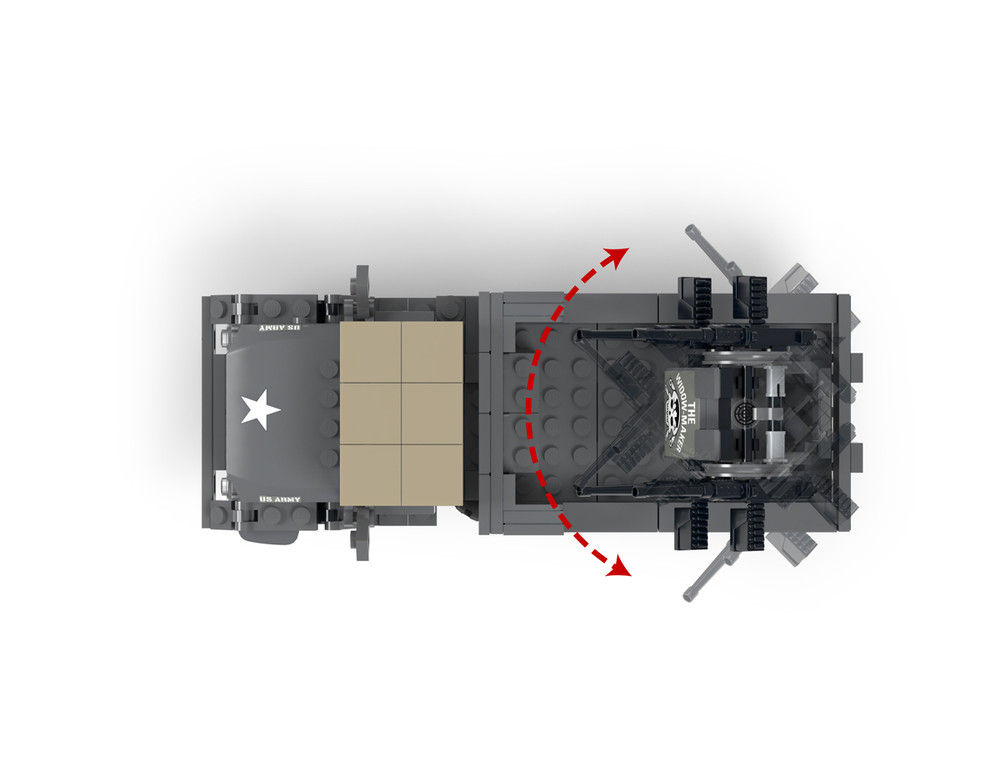 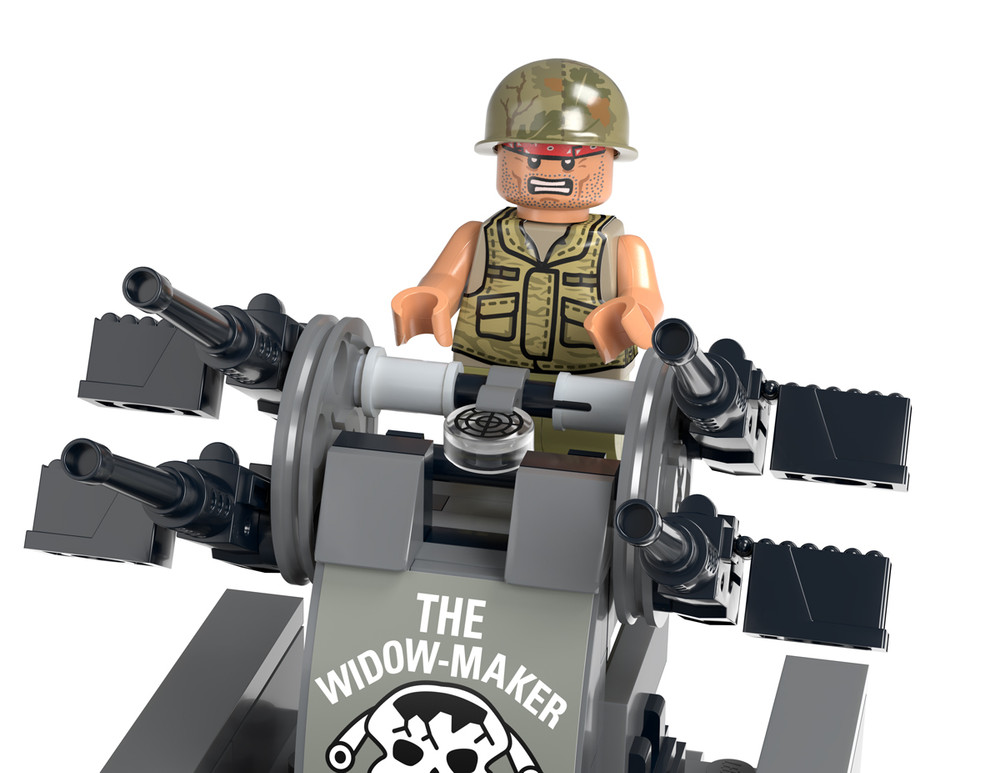 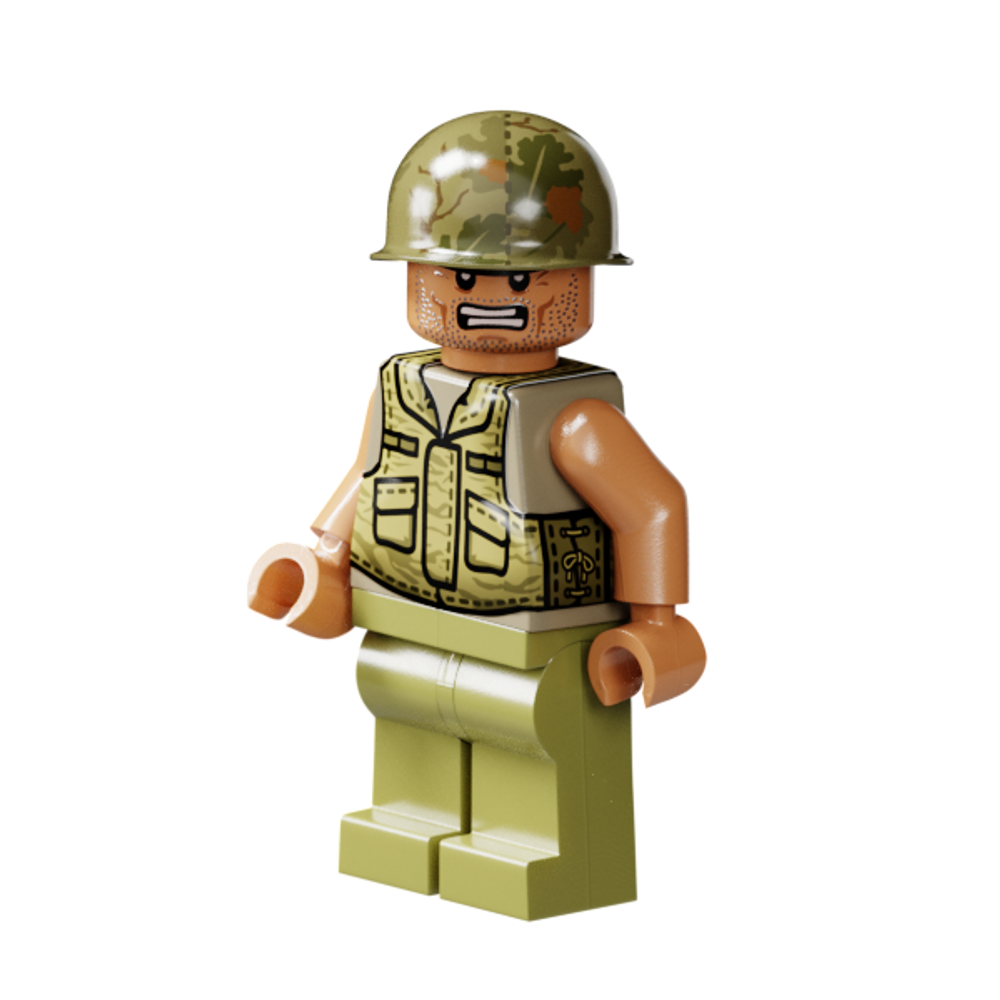 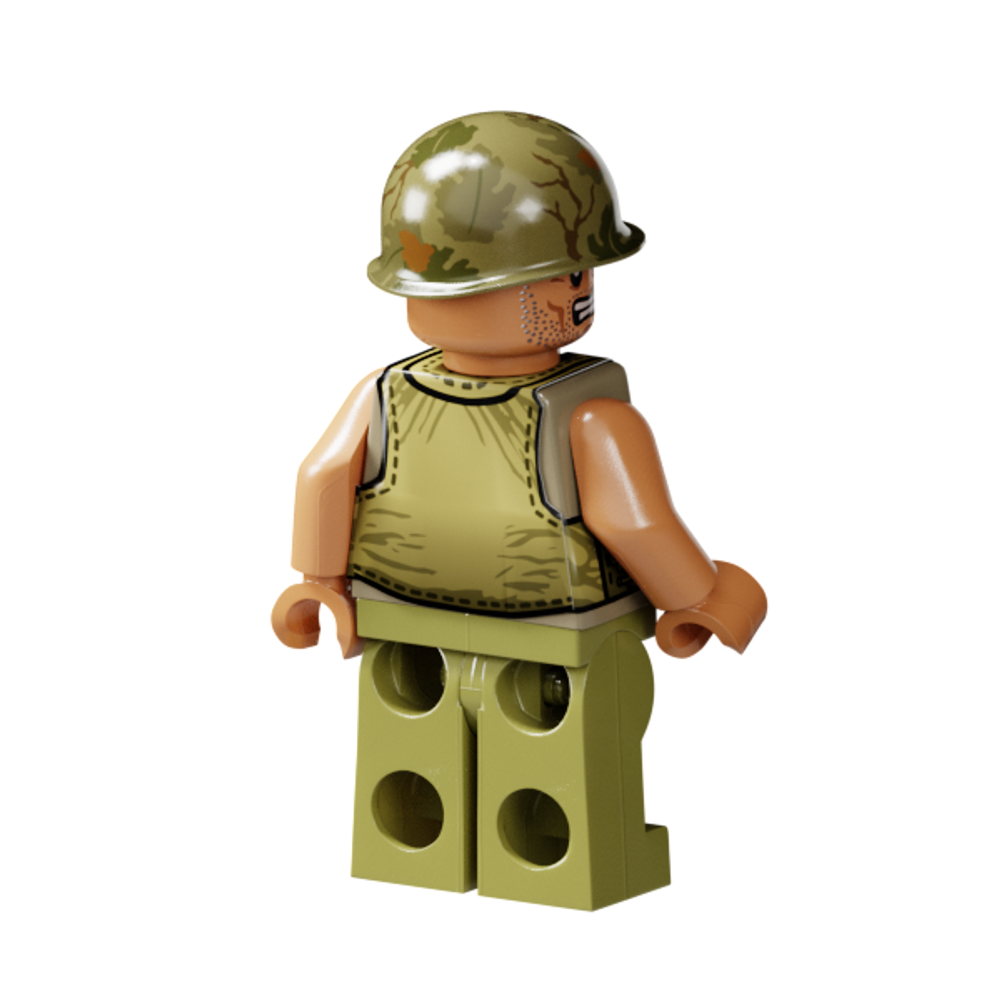 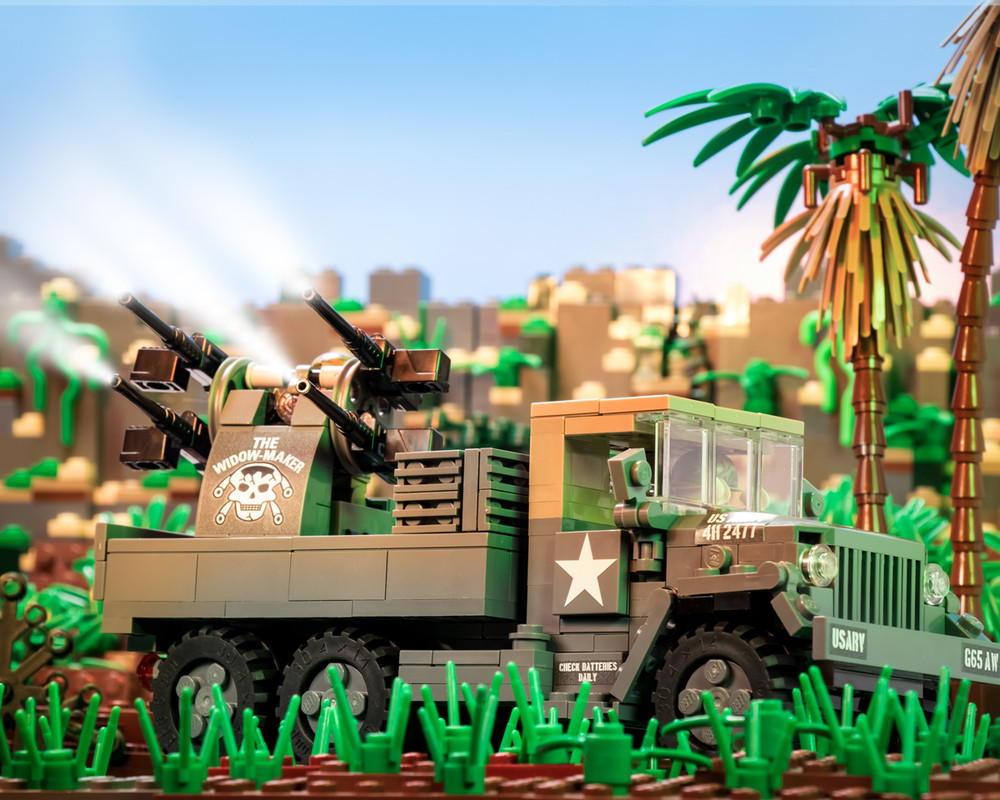 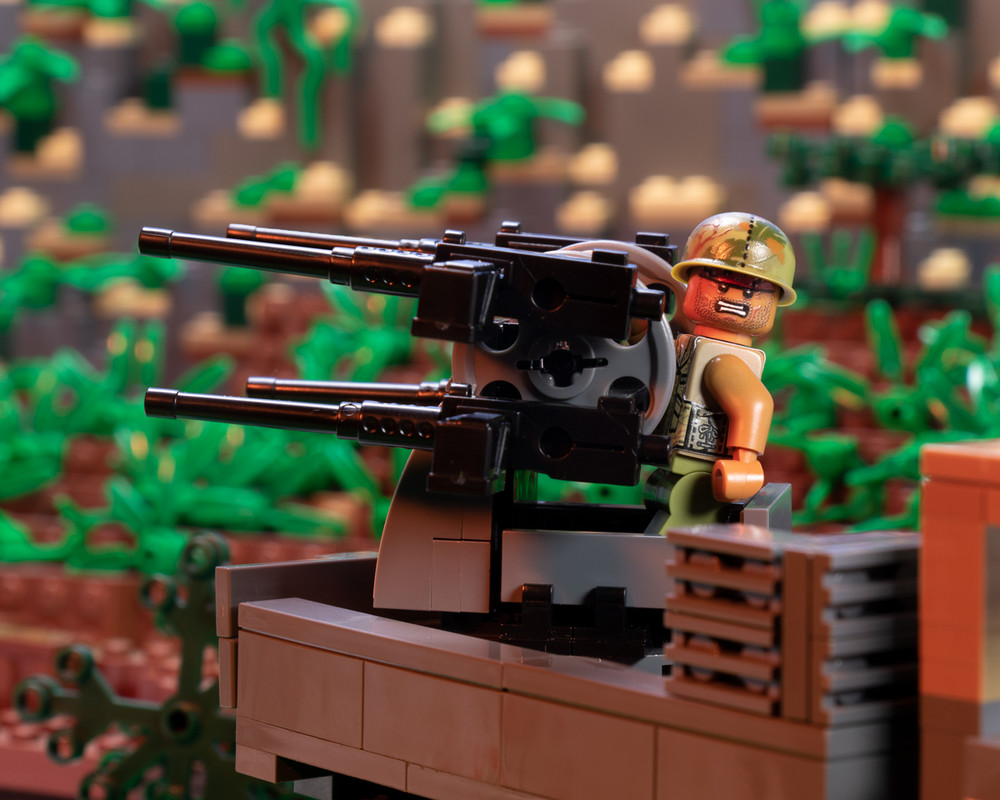 This Brickmania reissue and redesign of the M55 “Quad-50” gun truck is based on the earliest configuration of the weapon system used by the four US Army ADA batteries that deployed to Vietnam in 1966-67-68. They were G-65th ADA, D-71st ADA, E-41st Arty and G-55th ADA. They were originally configured with the base M55 gun turret on the M20 wheeled trailer mount with the M35 2.5-ton as the ‘prime mover’.  At times the M55 mount was ‘ground’ deployed by chopper to remote hilltops and firebases. When the M35 proved to be insufficient for carrying the combined weights of the mount, ammo and sandbags most M55s were refitted onto the M39/M809 5-ton. They were primarily utilized for convoy escort and road security during the day and firebase protection at night. Typically manned by a Squad leader, driver, gunner and two cannoneers. This kit version is based on “The Widowmaker” of G-65th ADA that operated along the DMZ from Khe Sanh to Dong Ha in 1967. 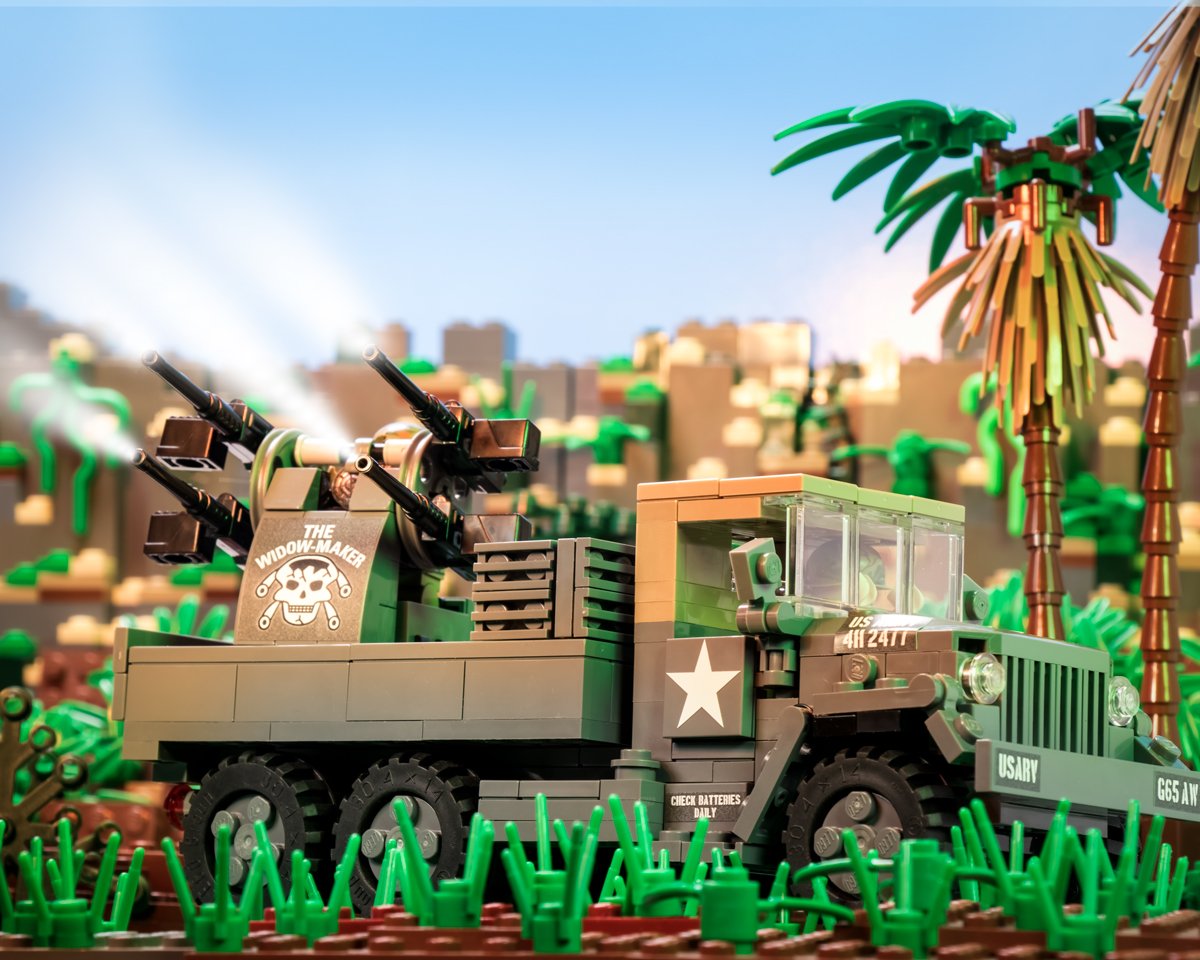 When fully operational, the four Browning M2-HB .50-caliber machine guns could fire with an effective rate of 1,000 to 1,500 rounds per minute. When in action the Quad-50, often called “Whispering Death”, could literally suck the life out of a hillside at ranges of up to half a mile. The .50-caliber projectile could rip deeply through a tree line as opposed to the contact detonation of the 40mm rounds of the M42 Duster to which the Quad batteries were attached.

Later versions of the M55 would add metal “bat wings’ to the sides of the cupola to give added protection to the cannoneers. Instructions for this modification are included (as well as for the ground mounted version).

Rare configurations of the M55 include: being mounted on the M548 tracked ammo carrier; and, once atop a M113 armored personnel carrier. In the south, they were even deployed on floating pontoon barges on major waterways like the Mekong River.

Quad-50 gun trucks and especially the gunners were specifically targeted by the enemy because of their immense firepower. Gun crews took great pride in their trucks and mounts and customized them with irreverent artwork, topical phrases, popular song titles and personal names. All four Quad-50 batteries were deactivated in late 1971 and early 1972. 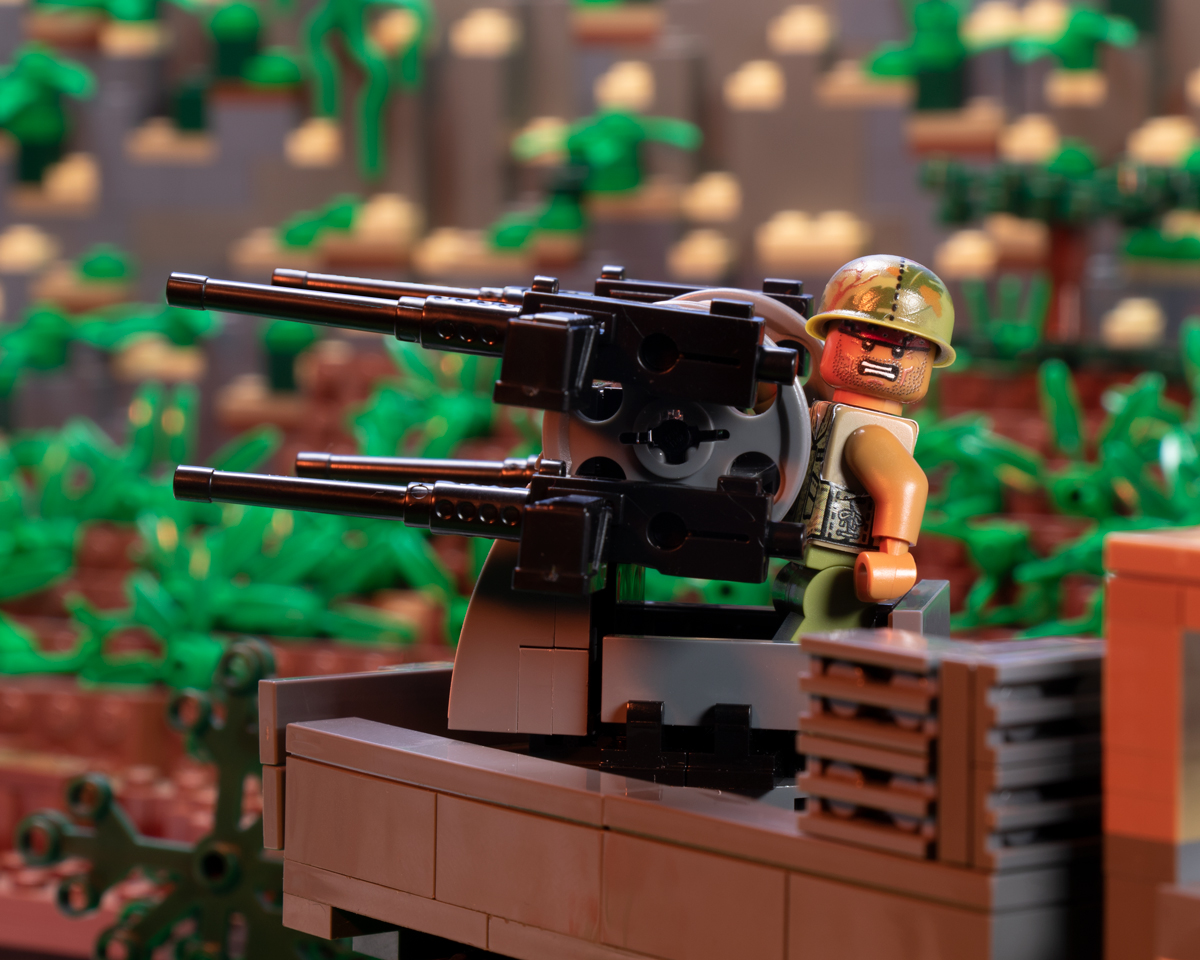