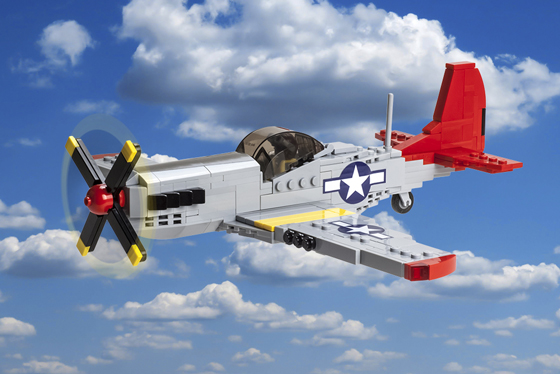 The P-51 "Mustang" was the answer to the Allied need for a long-range high performance fighter plane to escort heavy bombers deep over enemy territory. With a supercharged 12-cylinder Rolls-Royce Merlin engine, high capacity external fuel tanks, and six .50 caliber Browning M2 machine gun, the P51 could hold its own against any fighters the Axis could muster all the way to and from the bombing target. The P-51 could also be configured to carry bombs and 5" rockets against ground targets, and was an effective fighter bomber in its own right. The P-51D was the most widely produced model of World War II and can be distinguished from earlier models by its bubble shaped canopy.

The “Tuskegee Airmen” was the popular name of the 332nd fighter group, a group of African-American pilots who served in WWII. They were the first African-American aviators in the United States Armed Forces, a major accomplishment considering that many black Americans were still subject to Jim Crow laws and the American military was a segregated institution. The “Red Tail” moniker came from the fact that pilots in the 332nd would paint the noses, wingtips and rudders of their planes red.

All Brickmania model kits are made of new-condition elements from LEGO and BrickArms. This model comes disassembled, includes printed building instructions, and comes packaged in a sealed box. This is a limited edition kit and production may be discontinued at any time.