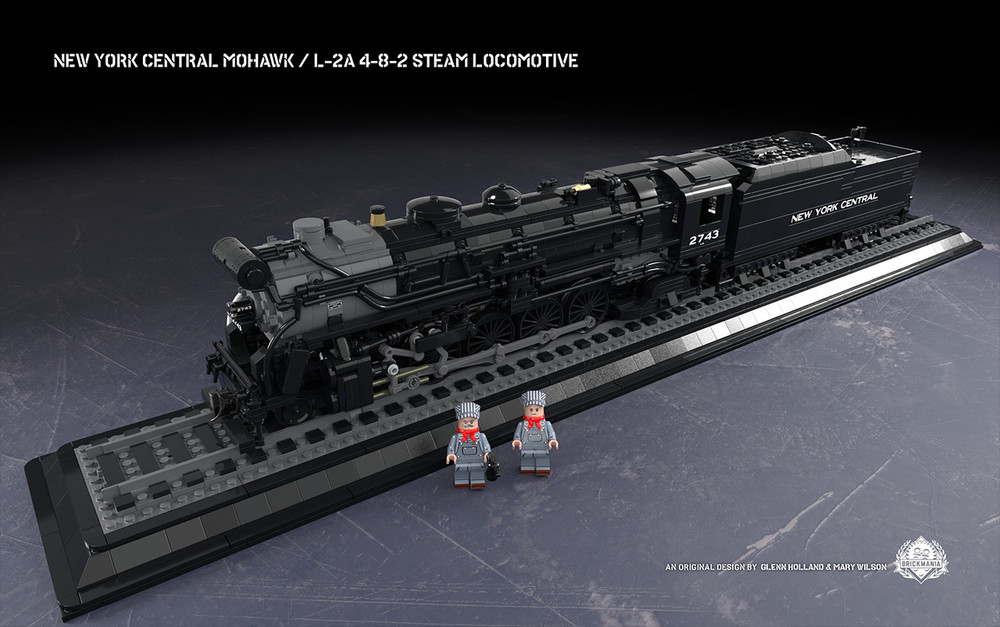 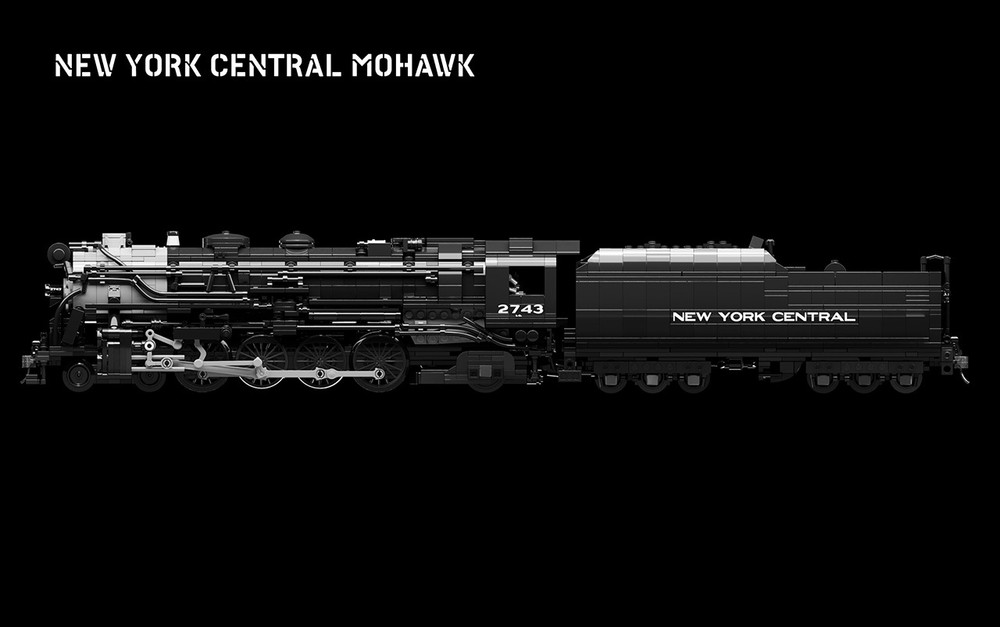 About the New York Central Mohawk:

The "Mohawk" moniker is the NYC's name for the 4-8-2 wheel arrangement (four pilot wheels, eight coupled driving wheels, and two trailing wheels). Conventionally, this type is known as a Mountain. The NYC decided to name them after the Mohawk river, which ran along their water level route, where the Mohawks were intended to run. The L-2a came about when the NYC wanted a locomotive to haul trains faster than their H10 class 2-8-2's. This new engine needed to be not only faster but larger as well, and it was found the previous generation of Mohawk, the L-1, had room to grow. Primary goals included achieving more power through minimum fuel consumption and weight. Height and width was also taken into account. The NYC's locomotives were designed to tighter clearances than most other lines, which is reflected on the L-2a and most of their other classes.

One prototype L-2a, #2700, was delivered in March, 1925 and featured a number of details that were not standard to NYC locomotives. The railroad learned from this prototype and went on to order 99 production locomotives, 2701-2799, from American Locomotive Company, or ALCO, which were delivered roughly in the first five months of 1926 and remained in service into the early 1950's. The L-2a class sports 69" driving wheels with a cylinder bore and stroke of 27"x30" and an 84' - 7" wheelbase including the tender. The L-2a's were also delivered with a booster trailing truck, which included cylinders powering that wheel for extra assistance when starting a train. The L-2'as were delivered with a 21 ton coal capacity in the tender.

All of the details mentioned above I have accurately represented on my model. I modeled locomotive #2743 specifically, reflecting some unique piping arrangements from other engines, including booster engine detail and the classic Elesco feedwater heater sitting atop the front of the smokebox, a key feature of NYC freight locomotives, and this class in particular. Most of the L-2a's received an upgraded coal capacity tender, moving to 25 tons. I have modeled this as it better represents the class; less than ten locomotives did NOT receive this upgrade. The model uses 2 Power Functions L motors and 2 IR receivers, allowing each motor to operate at full capacity. Both motors are powered from a custom 7.4V battery which offers a performance increase over the standard Power Functions AAA and Rechargeable battery. The connecting rods and Baker valve gear is custom parts modeled by myself using original blueprints and perfected for operation by Brickmania. It is a more accurate representation of Baker valve gear motion than I have achieved previously. The boiler and cab can be easily removed for servicing the motors. The power train is built up from the S160 design and has proven to be just as capable and strong. I've run this engine around my floor continuously and I have yet to have a problem with it. The L-2a has been on my project list for many years, being one of my favorite NYC freight locomotives and I'm glad to be able to start working more closely with Brickmania on railroad kits and also glad that I could start things off with this awesome example of 1920's fast freight power.
All Brickmania® model kits are made of new-condition LEGO® bricks. This model comes disassembled an includes complete printed building. This is a limited-edition kit and production may be discontinued at any time.