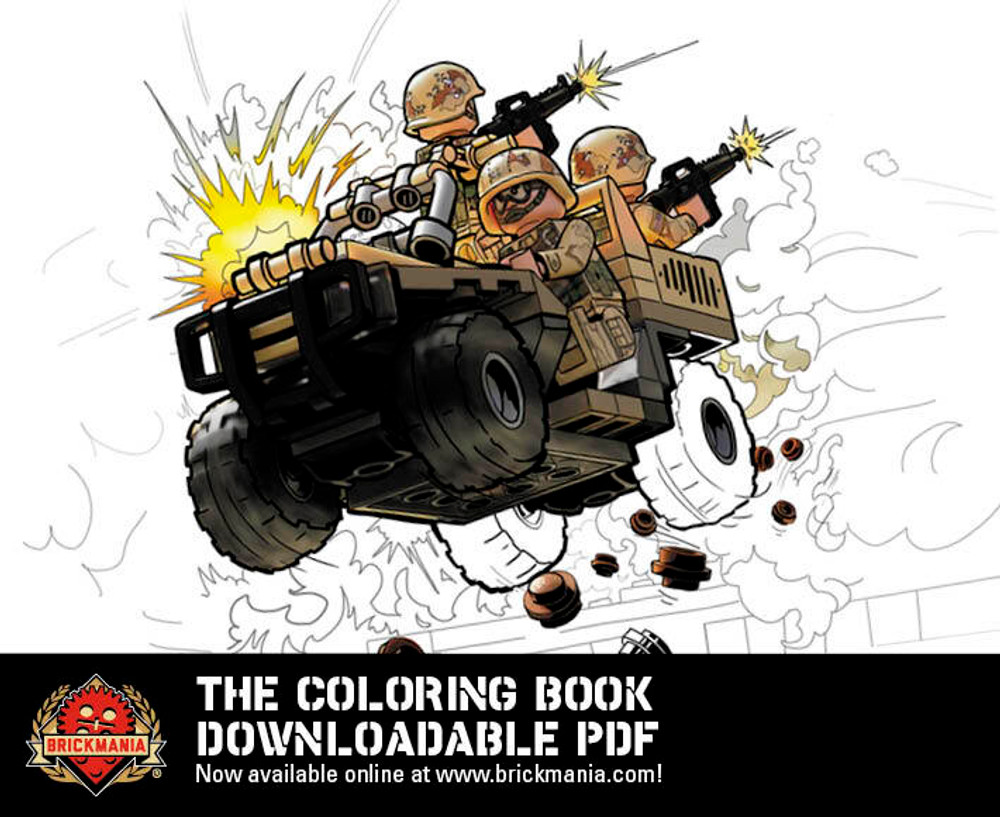 NOTE: This version of Brickmania The Coloring Book is a PDF file that will download directly to your computer. If you would like to purchase the physical copy click HERE.

Packed with TWELVE artistic recreations of Brickmania's signature actions shots, Brickmania The Coloring Book features some of Brickmania's most recent custom building kits! Color your way through history with a wide variety of influential aircraft and vehicles that helped shape nations like the United States, as well as many others, and some that are still in service around the world today! 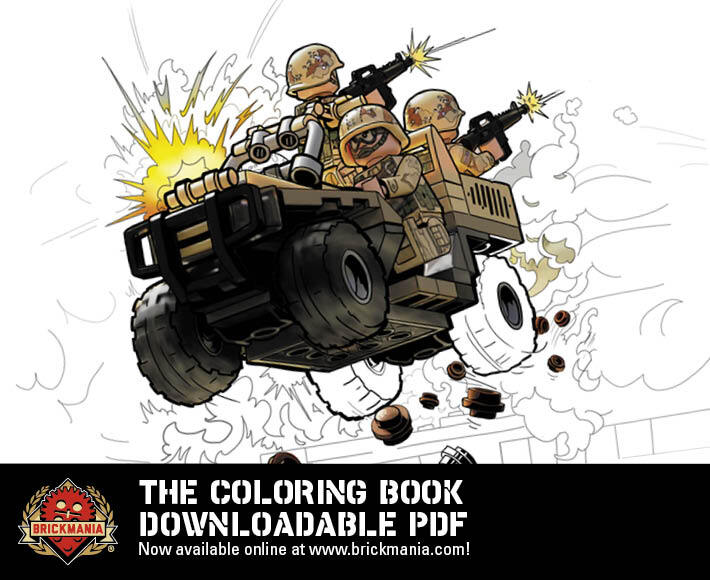 Here's what's in the book:

The most famous Sherman Jumbo of the entire 4th Armored Division, “Cobra King” with the “First in Bastogne” inscription on its side was the first of U.S. General George S. Patton’s Third Army to break the German lines surrounding Bastogne, Belgium. A critical turning point in the Battle of The Bulge.

A veteran of the Vietnam War, The F-4C Phantom II was one of the first multi-role aircraft deployed by the U.S. military.

Equipped with an impressive attack armament the Mosquito was nicknamed the “Wooden Wonder” because of the use of wood throughout the aircraft's design.

The PT-109 was a Motor Torpedo boat last commanded by Lieutenant, Junior Grade John F. Kennedy in the Pacific Theater during WWII.

The SdKfz 251 was Germany's most versatile and widely used armored halftrack vehicle of World War II, often referred to as the "Hanomag" after the manufacturer's name.

One of the most iconic planes of the Second World War, the Douglas C-47 dropped thousands of paratroopers from the night sky onto the beaches of Normandy on June 6, 1944, playing a crucial role in the transport of troops and supplies throughout every theatre of the war.

One of the most iconic aircraft of World War II, the Spitfire Mk I was respected by both the allied and axis powers for its incredible versatility and longevity.

The Tiger made its battlefield debut in September of 1942 and immediately proved effective at knocking out virtually any adversary within range.

The VAB saw action during the first Gulf War, Invasion of Afghanistan and UN enforcement actions in Africa.

The P-40 Warhawk was a widely used American fighter aircraft of World War II designed and manufactured by the Curtiss-Wright corporation.

Deployed in all branches of the military and in all theaters of the war, the 1/4 Ton 4X4 Utility Truck saw use from London to Midway and Berlin to Tokyo.