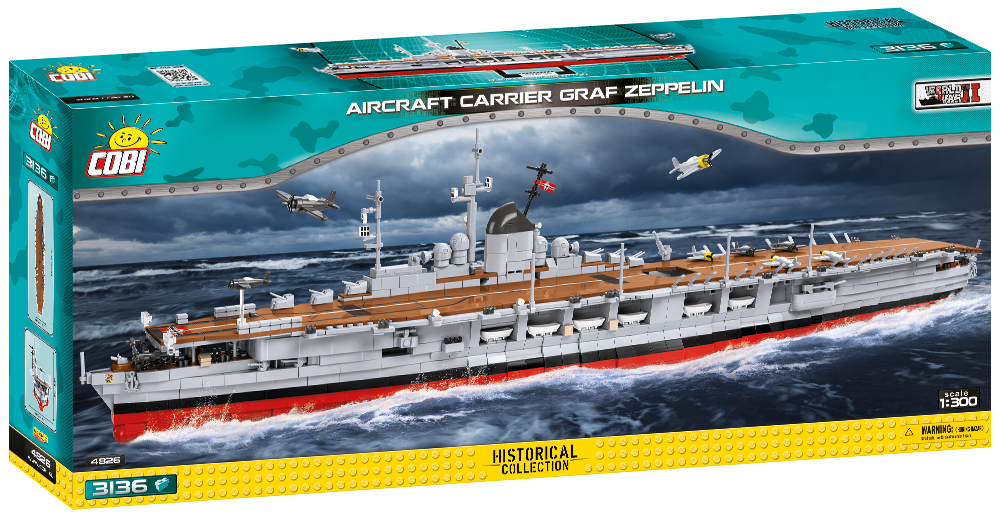 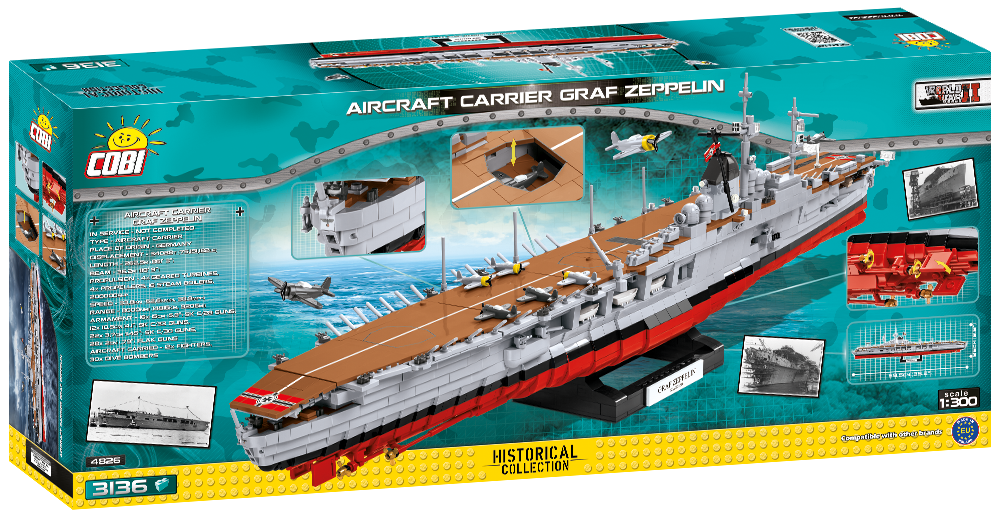 Get a set of COBI construction blocks and build a model of the legendary German aircraft carrier Graf Zeppelin! The model was designed in the standard 1: 300 scale. The record-breaking set consisting of 3136 blocks will provide many hours of exciting construction. This is a new release with improvements in the form of a new color of the brown tiles on the deck. The structure of the stacks has also changed. The high-quality prints used precisely reproduce the painting of the deck and details of the ship from the World War II period. The prints do not wear off even with intensive use. For the first time a working aircraft elevator has been designed on a COBI model. With the help of a knob located in the invisible lower part of the hull you can raise and lower the elevator with a plane attached to it. The model comes with eight block micro-planes, which are made in new color versions. The set also includes a special transparent brick which, after attaching it to the base, can imitate a plane taking off.

The COBI Graf Zeppelin aircraft carrier can be displayed on the display stand included in the set, which features a plate with the name and scale of the model. This advanced and exclusive collector's set is sure to please fans of navy, history and modeling, both big and small.

Graf Zeppelin is the only aircraft carrier in the history of Germany. Its construction began on December 28, 1936 in Kiel. At the behest of Adolf Hitler, work was stopped in 1943 despite the progress of the construction at over 90%. This was due to the withdrawal of all large units after the Battle of the Barents Sea. The aircraft carrier was towed to Szczecin, where useful equipment was dismantled. Its construction was never completed. At the beginning of 1945, fearing the advances of the Red Army, the carrier was partially sunk and shelled by artillery. In the summer of 1945, the raised and partially repaired ship was incorporated into the USSR Navy. However, it was not qualified for renovation. In 1947, she served as a target ship and was sunk in the Baltic Sea. In 2006, the shipwreck was located 55 km north of Władysławowo. It rests at a depth of 87 meters.

• Meets the safety standards for products for children

• Fully compatible with other brands of construction blocks

• A special transparent block that, after attaching it to the underlay, can imitate a taking off plane